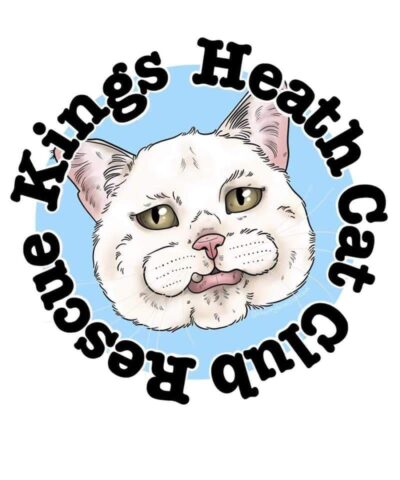 What is Kings Heath Cat Club?

Kings Heath Cat Club (KHCC) was initially a Facebook group set up by Caroline Alexander back in 2012, in a bid to unite local cat lovers, and thus enabling them to have a place to share pictures of their cats and to share knowledge amongst each other with cat related queries or problems. The Facebook group has now grown and has over 8000+ members and growing month on month.

As a result of the KHCC Facebook Group, it was obvious that more was needed.  By January 2017, Ali O'Cat launched the KHCC Rescue.

The Rescue is run on alot of hard work, good will, and donations from supporters of the Rescue.  There are a small but dedicated Team of Fosterers and Volunteers who keep the wheels turning, and who help to rescue stray, feral and abandoned cats across the whole of Birmingham.  Almost all the Team work full time and have families, but are dedicated and passionate about the welfare of the cats already in the care of Kings Heath Cat Rescue or soon to be.

The Team help hundreds of cats every single year, taking on abused, abandoned, stray and injured cats who often have lived on the streets for a long time, and have had little to no help.  No cat is left behind.

The dedicated Team rehabilitates every animal, ensuring their clean bill of health and then rehoming them. Before they can be rehomed they’re vaccinated, neutered, blood tested, flea & worm treated, and microchipped costing the rescue hundreds if not thousands in vet bills per cat.

Kings Heath Cat Club Rescue strives to rescue and rehabilitate as many cats as possible from the streets of Birmingham!